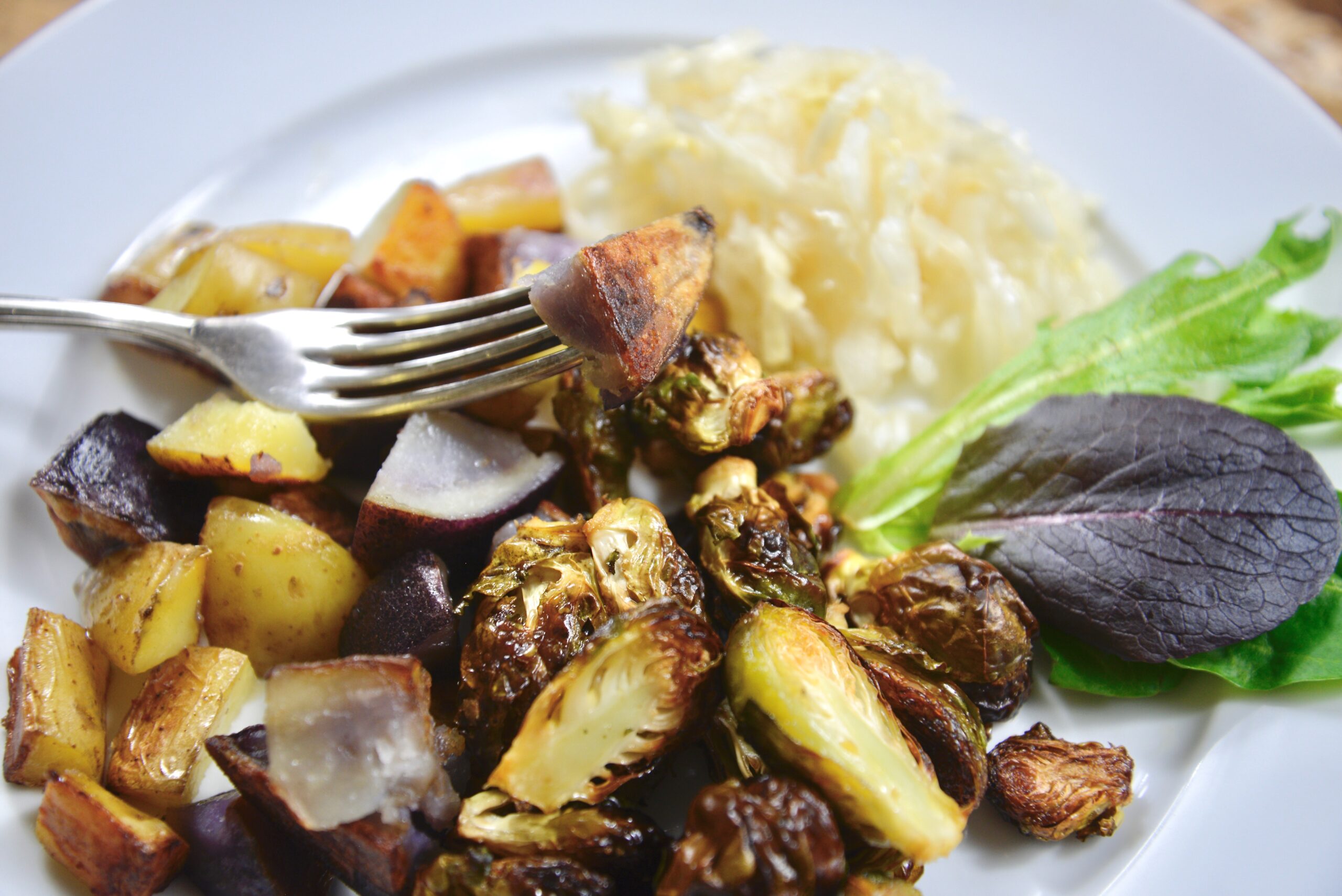 You might be surprised at the good taste and nutritional benefits of roasting potatoes and brussel sprouts in camel hump fat.

Yep, that’s what we had for dinner.

On any given day, you might find me looking up recipes and researching food and nutrition. In fact, I have been doing that for decades. I used to read magazines and books but with the internet, I now read articles mostly online. It’s just what I enjoy doing. Next to cooking and preparing healthy food for my family.

Recently, I was looking at animal fats. They have certainly had a come-back since the days of low-fat and margarine. There’s a lot of research showing that saturated fats are better for us than vegetable oils (you can read much more here).

In a traditional kitchen, we are not afraid to use butter, tallow, or lard, especially from pastured-raised animals.

So, then I came across camel hump fat – and I was intrigued to say the least. And what’s a girl to do? Try it out. I ordered this interesting fat online and received it a few days later.

One of the reasons I ordered it, was the impressive nutritional profile. Apparently, camel hump fat contains Conjugated Linoleic Acid (CLA), Arachidonic acid, Caprice acid, Lauric Acid, Stearic Acid, Palmitoleic Acid, Beta Carotene, plus vitamins A, E, K, B12, and Biotin. And there’s three times more Oleic acid (Omega 9) than in coconut oil. Hump Fat has 40% of your daily Vitamin B12 in a single tablespoon! No other fat or cooking oil offers this level of bioavailable nutrients (source).

Immediately, I opened up the jar to smell it. It didn’t smell like anything at all. The next test would be to use it in a recipe.

I decided to use the camel hump fat in two different ways: in my cast-iron skillet and for roasting in the oven. Note: the following recipe would also work well with tallow or lard (which are traditionally used for frying and roasting).

Therefore, I cut my brussel sprouts in half and mixed them with the melted camel hump fat in a glas pyrex dish, and sprinkled everything with salt and pepper. This went into the oven at 425˚F for about 30 mins (up to 45 mins depending on the size of your brussel sprouts).

At the same time, I had already cut some yellow dutch potatoes and purple potatoes into small cubes. I added the camel hump fat to the hot skillet and put the potatoes in pretty much all in one layer.

Now, at this point, I got a bit worried. All of a sudden, my kitchen smelled like the animal house in a zoo 😳. You know, that gamey animal smell. What if this was one big mistake????

Since I was already this far committed to our veggies being roasted in camel fat, I would just continue. But eventually, that smell was completely gone.

After about 15 mins, I stirred both the brussel sprouts in the oven and the potatoes in the skillet.

When they were done, I dished them onto plates with a good dollop of sauerkraut (find my recipe here) and a bit of lettuce. A protein would work really well with this meal. You could add something a bit more hearty such as bison, salmon, or sausages.

What about the taste?

I have to admit that I was a bit concerned if my family would like this meal. I decided to NOT tell them that I had roasted and fried their food in camel hump fat. Nobody noticed a thing and nobody said anything. When I told them, they still couldn’t taste it. I have to admit that every few bites there was a hint of a gamey taste to it but not off-putting at all.

We all loved the crispiness! The brussel sprouts were crisp on the outside but tender on the inside. The potatoes had a nice crunchy side and were perfectly done.

We all like the taste and how the food came out. Especially with the nutritional profile of camel hump fat, this one will be a keeper.

Have you tried exotic fats? Would you try camel hump fat? Please let me know in the comments below! 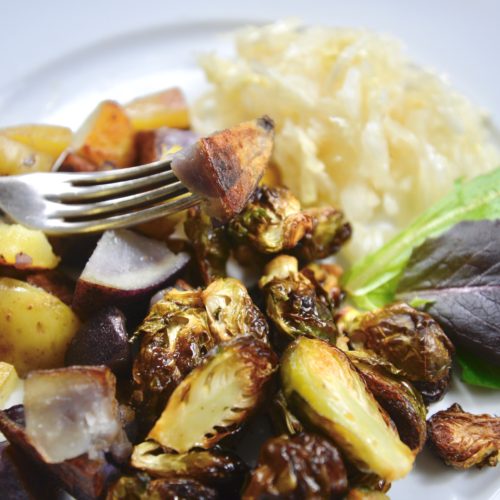 These delicious Königsberger Klopse are a classic German dish of tender meatballs in a delicate white sauce with capers. Königsberger Klopse is one of those classic dishes that you will find at most German restaurants. Not only that, it is so easy to make that many Germans serve this at home. This was certainly the… 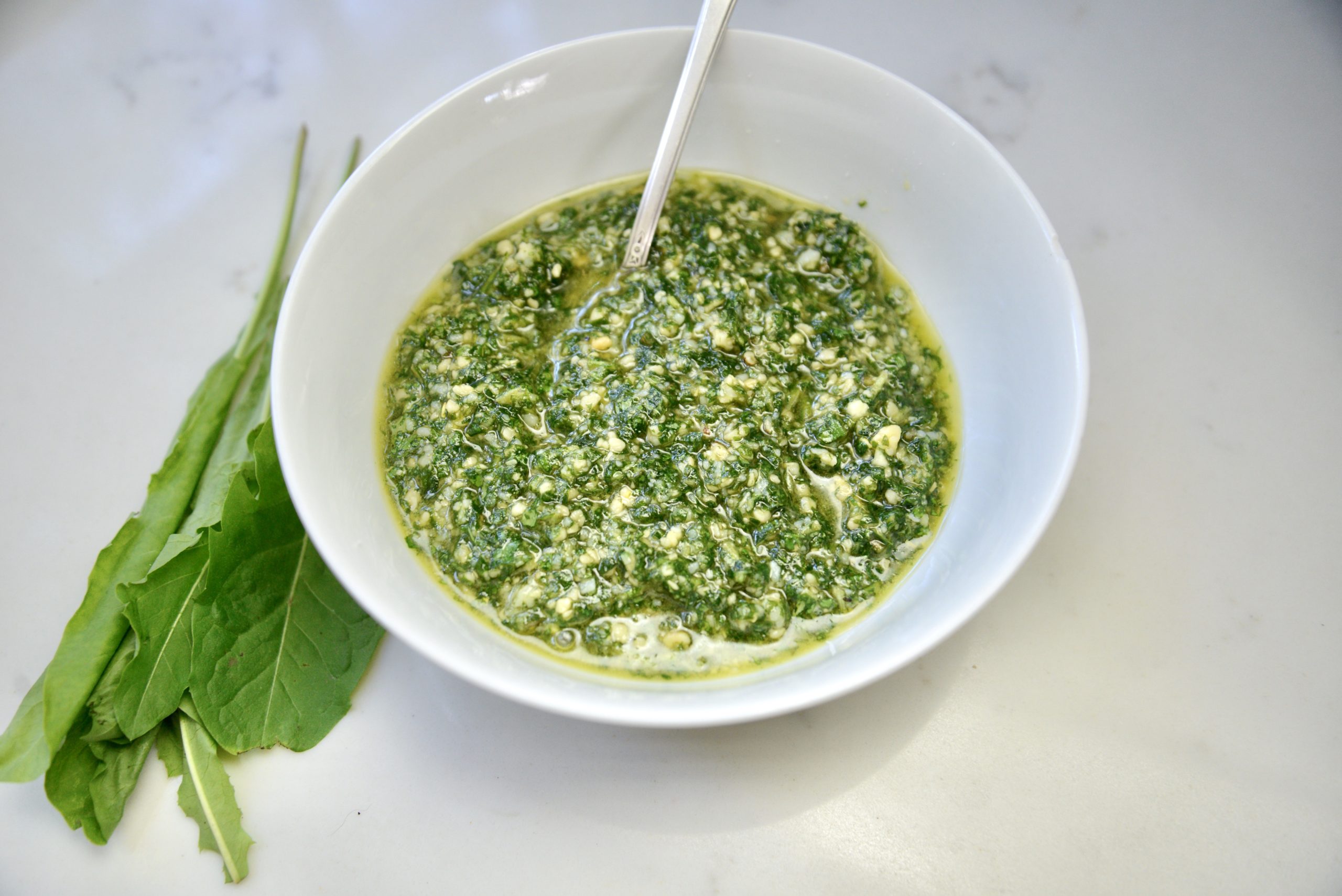 If you have dandelions growing in your garden, you’ll love this dandelion pesto that is a healthy twist of a popular classic. I have had so many requests for a recipe of my dandelion pesto, so here it is! You might already enjoy its popular cousin, the traditional basil pesto. While pesto just refers to… 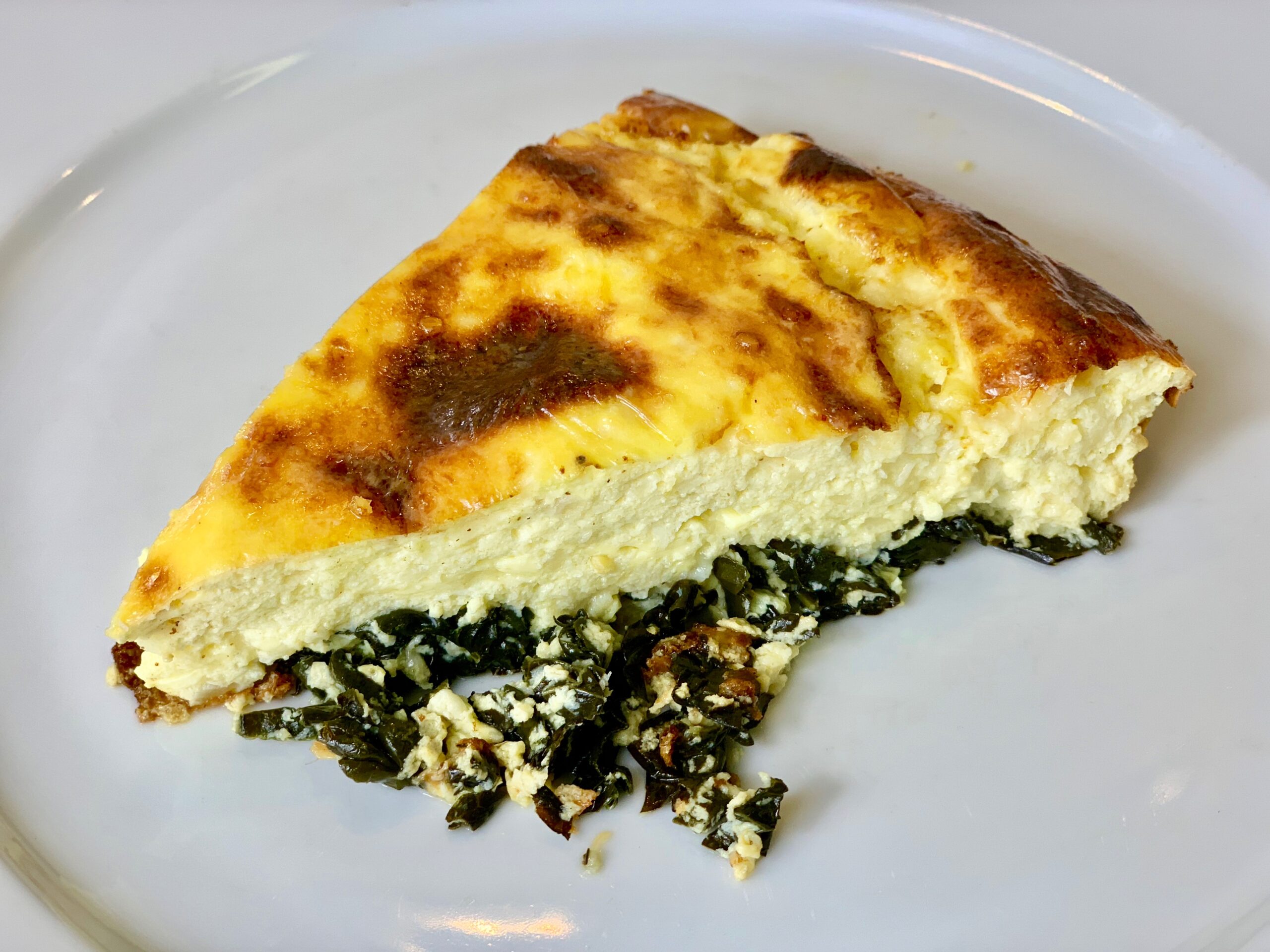 This recipe crustless Cauliflower Kale Quiche is a healthified version of the French classic.  We had a lazy afternoon here at Our Gabled Home.  When I slipped into my pj’s, it actually felt extra-lazy.  I was just trying to go with the flow.  Making the most of the fact that due to the wildfires here… 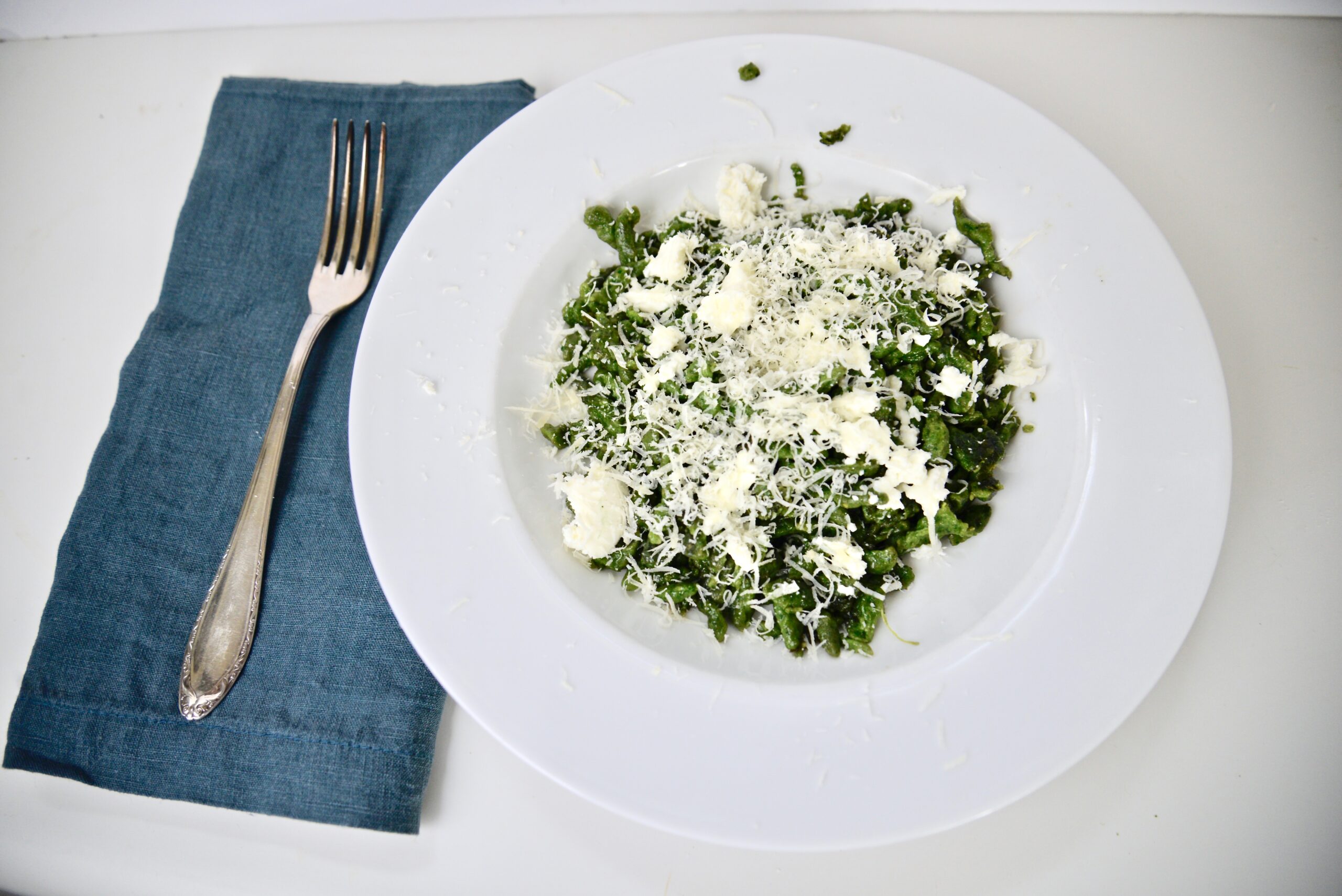 This is an updated healthier version of a German classic pasta: stinging nettle adds a pop of color to easy-to-make spaetzle! Have you ever heard of spaetzle? They are tiny little German dumplings. To make them a bit more interesting, I am adding stinging nettle to the spaetzle dough. In the spring, stinging nettle spaetzle… 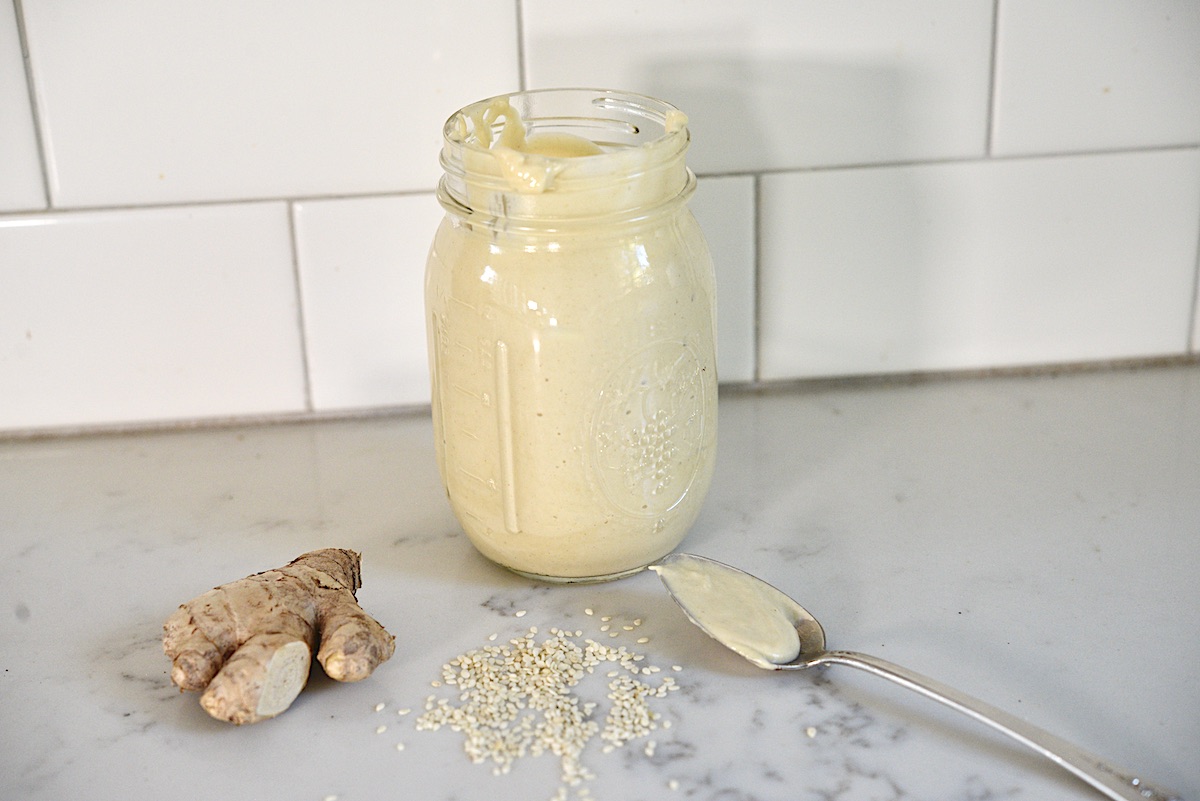 This delicious Miso Tahini Dressing is my go-to recipe when I want to enjoy a meal of simple steamed veggies bowl. If you have never had this super delicious miso tahini dressing, you have been missing out! We have all heard about the benefits of a plant-based diet. For me this is not a hard… 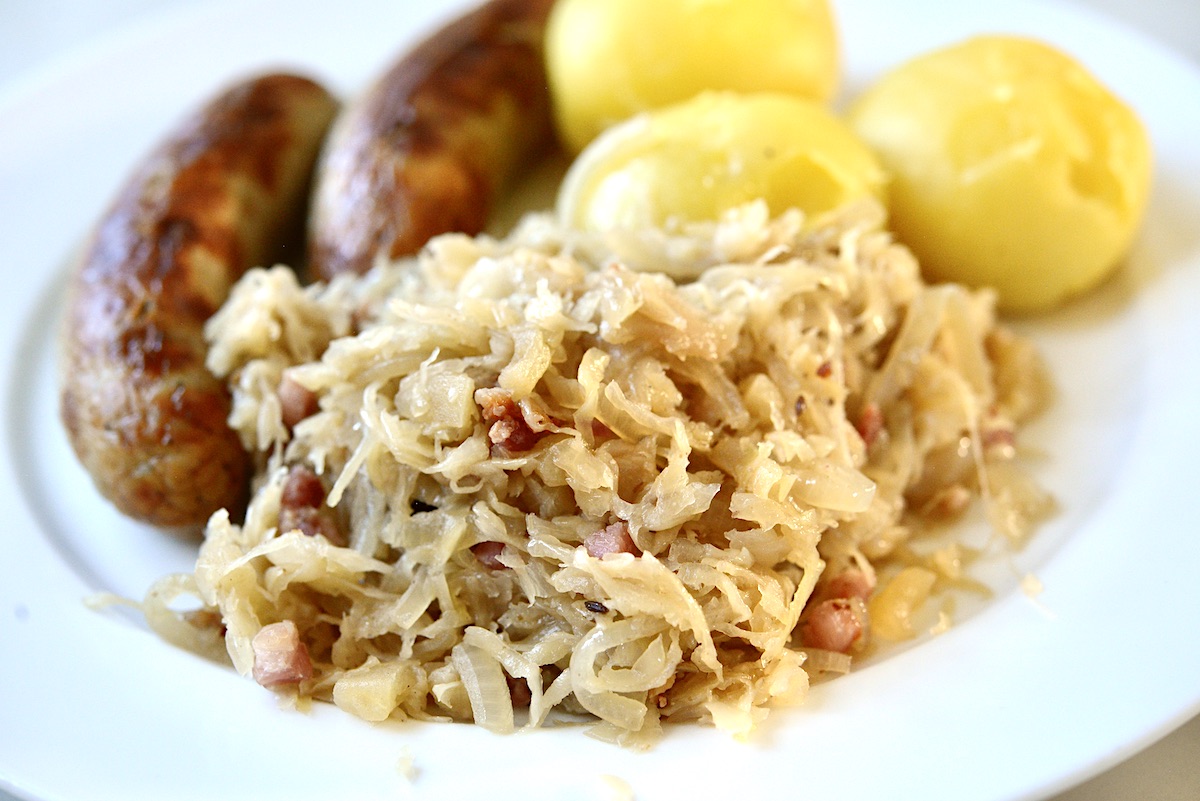 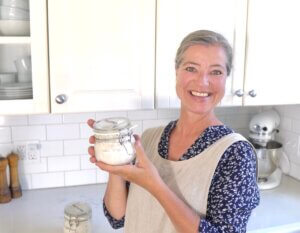 Stay in touch with me